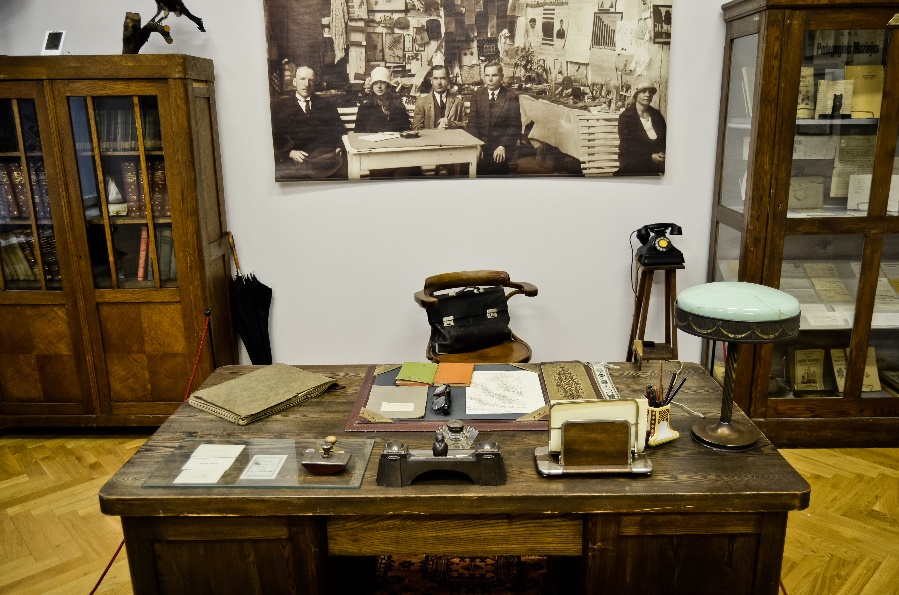 In 2005, the Vincas Ruzgas (1890–1972) memorial room was established in the museum. Personal belongings, photographs, documents, letters, rewards, textbooks and other exhibits of V. Ruzgas, the museum founder and long term director, director of V. Kudirka library-reading room, teacher and author of textbooks being displayed there. In 2015, the memorial room was renewed and complemented with newly acquired exhibits and exhibits from the museum collections.

The exposition of the V. Ruzgas memorial room was prepared by museologist Jūratė Jagminienė and artist Viktorija Paliokienė, leader of the customer service section Gabija Mackevičiūtė and designer Raminta Ardzevičienė.

FROM THE ANCIENT DAYS TO US

The exposition introduces its visitors with the development of education in Lithuania from the first mentioning of the school near Vilnius Cathedral in 1397 to 1990. It’s the main historical exposition in the museum. Apart from history of pedagogy three exposition halls uncover the historical change in exposition methods of the museum valuables. Here you can find traditional showcases, school illustrations and models, interactive furniture exhibited in the atmosphere of different eras. 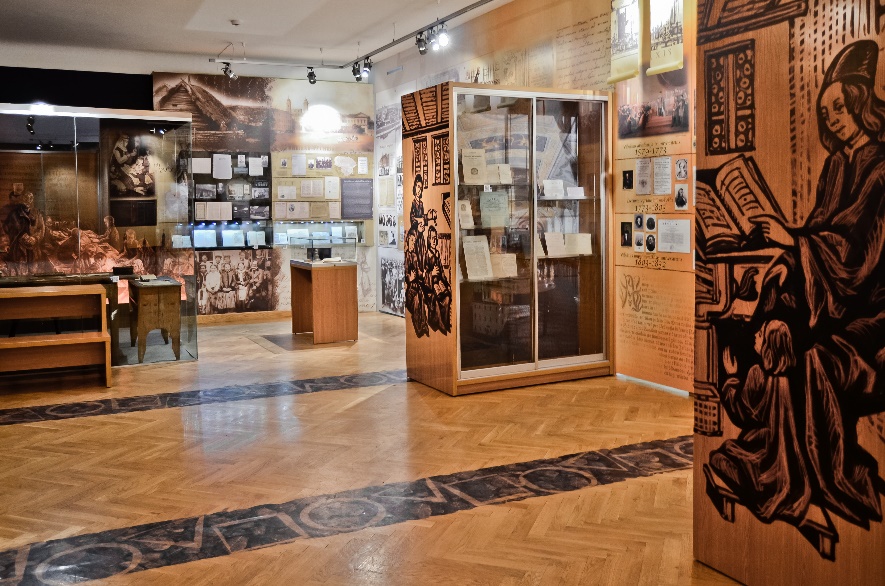 The Oldest Period Hall (14th-19th century) recreates the path of education of Christian Europe in Lithuania, the influence of the Jesuit Order, the reformation movement and the influence that Vilnius university had on the formation of Lithuanian education system. The ways in which tsarist Russia tried to turn the school into the tool of russification of Lithuanians in the 19th century are also displayed. This period hall also presents the activities of the first nurturers of Lithuanian national school S. Daukantas and M. Valančius. Special attention is put on the secret school, which is a manifestation of national rebirth. The Lithuanian literature, text books, students’ notebooks, school bell, inkpots and other school items from the 18th-19th century are exhibited here; a model of the secret school is also shown. 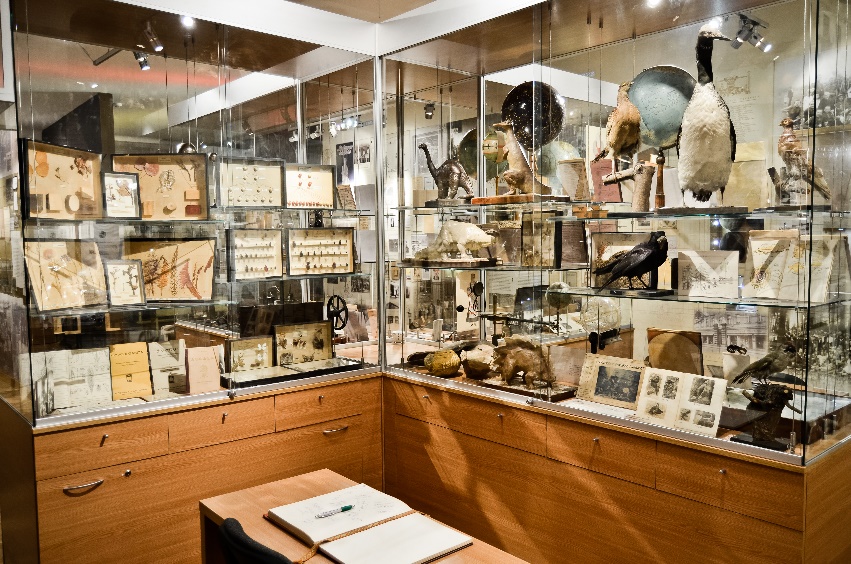 The hall „Education in Lithuania 1904–1940“features exhibits from the beginning of the 20th century, which illustrate the period of the national school creation: documents, photographs, operating procedures of the first education societies and rare text books. In 1918-1940 the democracy-based education system was created and functioned in the independent Lithuania. All parts of it, including preschool education, primary, secondary and higher education are introduced in separate exposition stands. The visitors will be fascinated by the rich collection of teaching items from that period. An interesting accent of the exposition is the illustration-model of the primary school class. 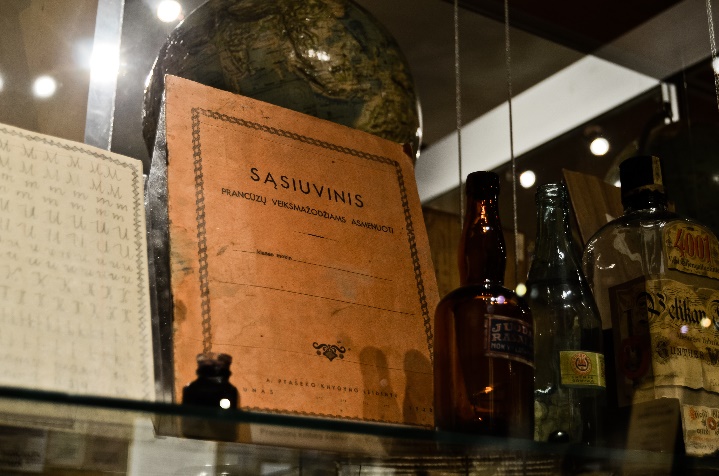 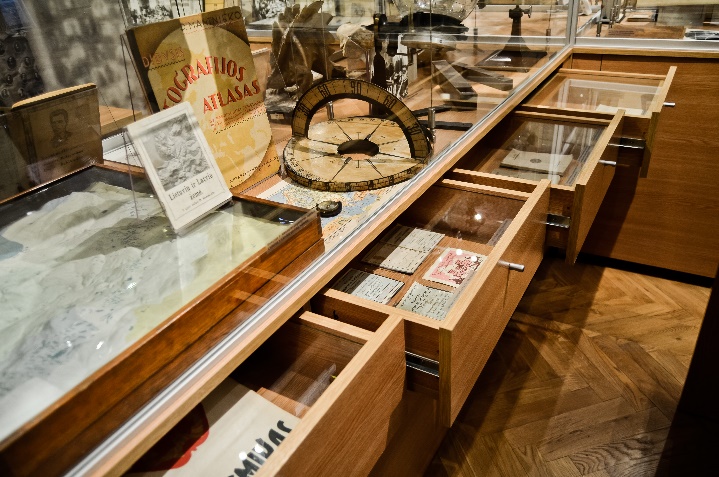 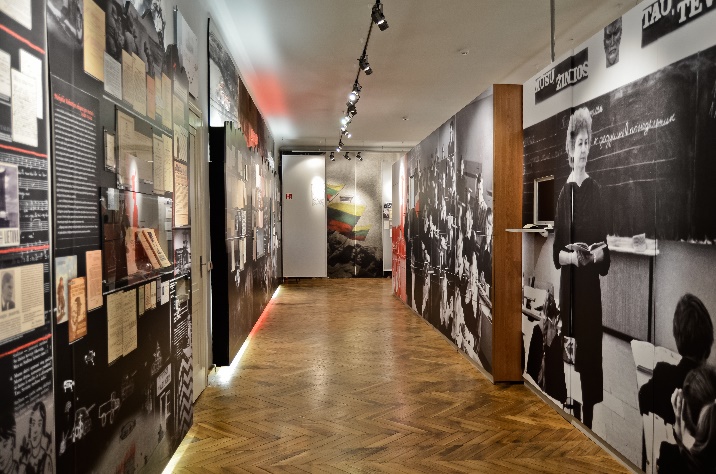 The hall, oriented to the development of the Lithuanian and emigrants’ education in 1940–1990 presents the history of the Lithuanian national school, which was influenced by the political events from the middle of the 20th century. Among the exhibits the visitors will find unique documents of the soviet education system from 1940s – 1980s, politically ideological education literature, students’ school items (notebooks, certificates, purses, uniforms and other), teaching aids of individual subjects; personal belongings of the exiled educators and students, certificates acquired at the exile; Lithuanian underground press. The emigrant education is presented by the photographic and documentary material of the national schools, text books, periodicals, items from the Montessori children school in Chicago. 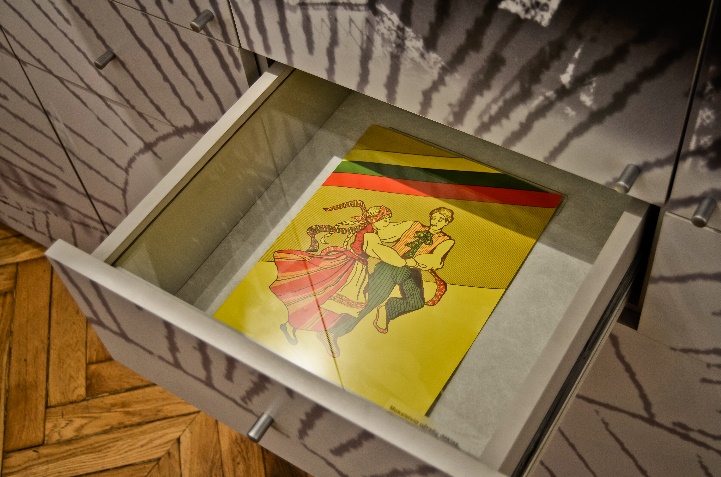 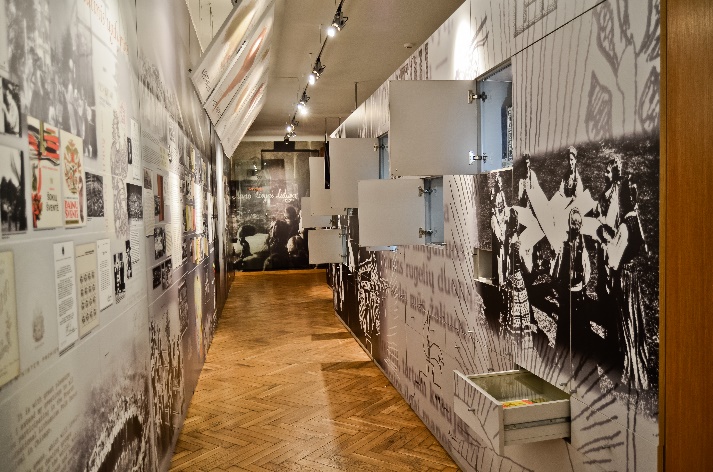 1ST HALF OF THE 20TH CENTURY 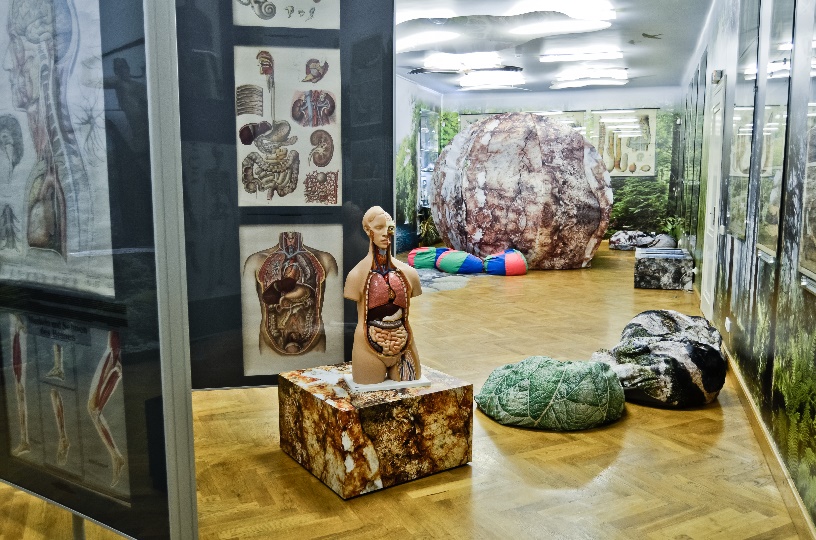 The exposition introduces the visual teaching materials from the funds of the Museum of Lithuanian Education History that were used at Lithuanian schools at the beginning of the 20th century: posters, moulages, models, herbariums, collection of minerals. The biggest part of the exposition is dedicated to biology. There are three branches of biology: botany (posters of plants and their structure, moulages), zoology (posters of insects, birds, fish and other animals), and human anatomy (first aid posters, models of blood circulation, muscles and internal organs, moulages). Human’s dependence on the nature is vividly demonstrated by a unique collection of the Indian hunt utilities, which was brought from Brazil by J. Budrys. A part of the exposition is dedicated to geology and paleontology and features E. Golyškinas’ collection of minerals, fossils and boulders, which are of exclusive value (it marks the beginning of the museology in Kaunas).

Interactive computer games, which were integrated to the exposition in 2013, help to deepen the knowledge and find out new things about birds, geological minerals as well as to experience positive emotions of discovery and cognition. 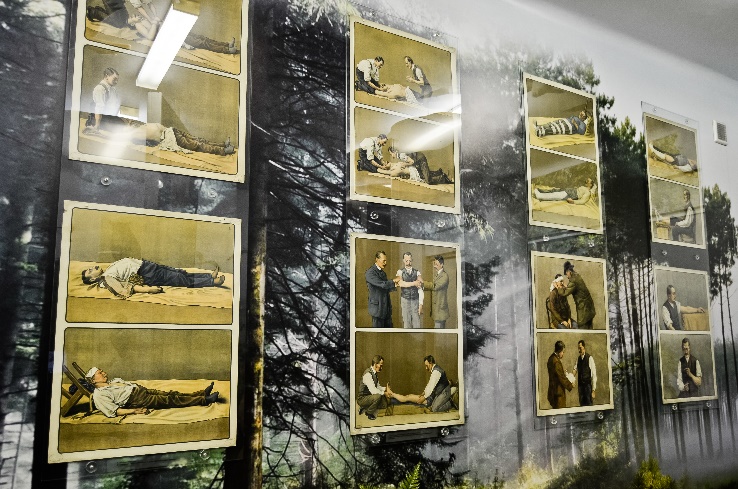 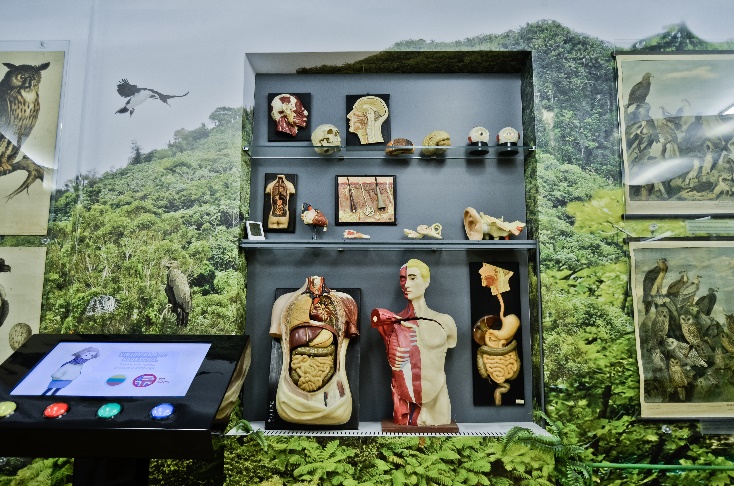 Chief museologist Gabija Mackevičiūtė and designer Renata Vinckevičiūtė prepared the concept of the exposition and collected the materials from the museum collections. The exposition was renewed by UAB „Cyanus", designer Jolanta Velykienė. 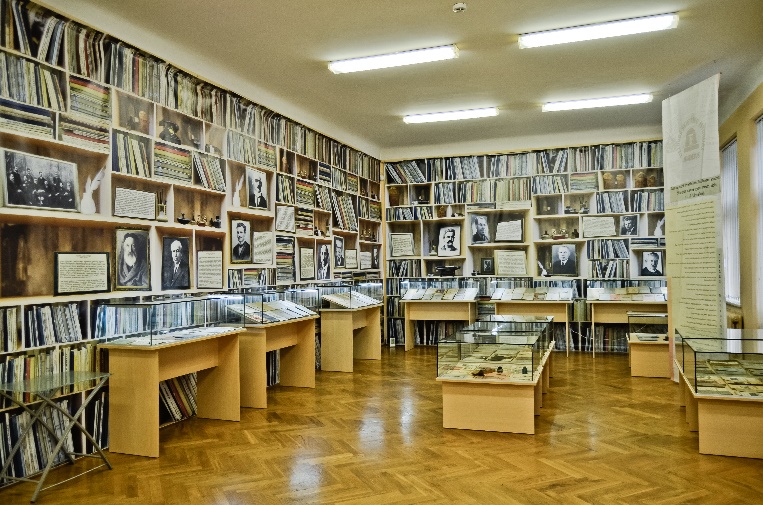 The exposition commemorates the 90th foundation anniversary of the Museum of Lithuanian Education History. Documents, photos, numerous and rich collection of school books and teaching materials from the beginning of the 20th century are being exhibited here alongside the widely presented authors of the first Lithuanian text books. Exposition features a very valuable exhibit: Jonas Jablonskis‘s letter addressed to the educator and text book author Juozas Damijonaitis. In 2014, unique personal belongings of the teacher and text book author Jonas Murka (1889-1945) were presented to the museum by his relatives to complement the exposition. 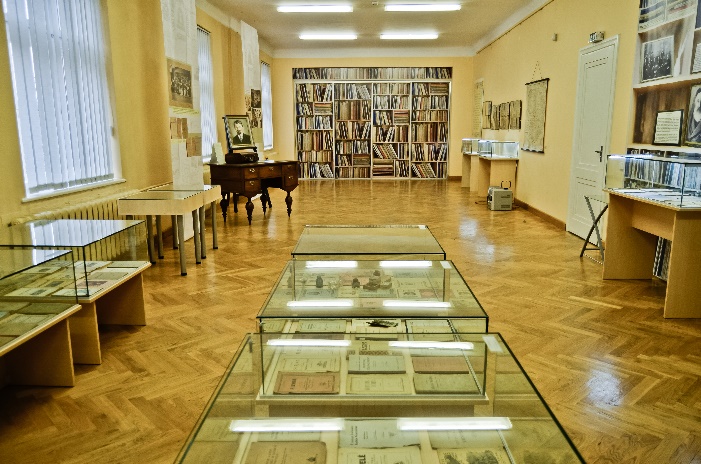 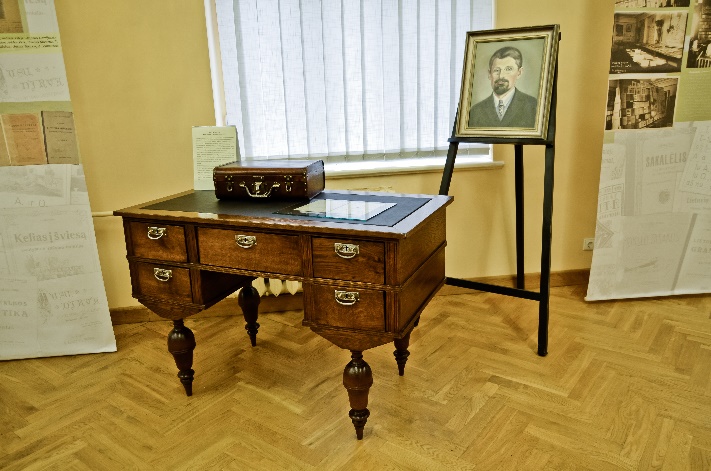 ENLIGHTMENT PHILOSOPHERS IN ARTS OF THE 17TH-20TH CENTURY 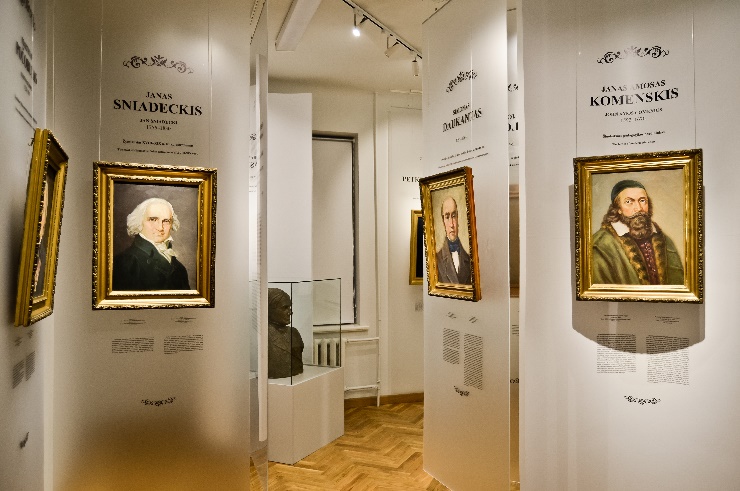 The exposition “The Enlightment Philosophers of the 17th – 20th Century”, which was prepared from the museum collection of artworks in 2008, was renewed at the end of 2014. The interactive educational space was created. In order to present the exceptional path of the European education in Lithuania the exposition features the portraits of the most famous founders and promoters of the primary and academic education system. It features the portraits of Janas Amosas Komenskis, Martynas Počobutas, Jonas Sniadeckis, Simonas Daukantas, Jonas Jablonskis, Gabrielė Petkevičaitė-Bitė, Pranas Mašiotas, Stasys Šalkauskis and other Enlightment philosophers. It introduces the exceptional work “The Book Distributor” by the founder of the Vilnius drawing school, artist Ivan Trutnev. 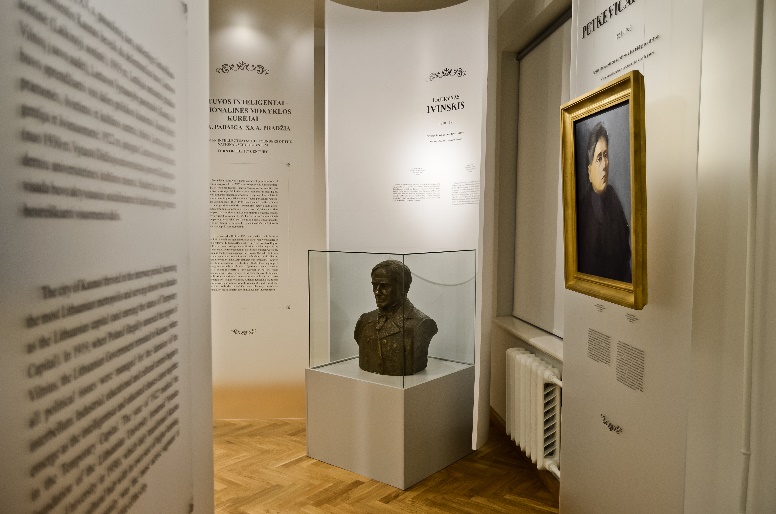 The renewed interactive exposition highlights the achievements of famous European educators in science and education, unconventionally introduces the unique breaks of the Lithuanian school history of the period (the beginning of academic education in Lithuania, origins of the national pedagogy, development of the Lithuanian school, formation of Kaunas as a functional university city in 1920-1960). The achievements of scientists and people of culture, their influence on the development of the education in Lithuania are conveyed through an interactive game. The exposition’s space is renewed and opened for educational activities through the original design decisions. The exposition on the ground floor of the museum can be considered an introduction to the rich world of the Lithuanian education history which is presented to the visitors of the museum through artifacts and detailed stories.